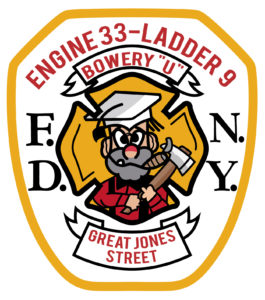 When a phone alarm for a fire in an occupied building comes in at night or early in the morning there is the possibility that people may be trapped by the smoke and heat of a fire. On December 15, 2017 at 2111 hours, Tower Ladder 9 responded as the first due truck for a fire in an old law tenement at 80 East 3rd Street in Manhattan. Upon arrival, the inside team of Ladder Co. 9, including FF. Eric Leon, the irons firefighter, made their way to the third floor, which was where the fire was reported to be. As the inside team was ascending the stairs, LT. Ralph Holguin of Ladder 9 was informed by civilians on the second floor that there was a fire on the third floor. Once on the third floor, LT. Aviles of Engine Co. 28 advised LT. Holguin that the fire could be in apartment 9. The truck officer touched the door with the back of his gloved hand and felt extreme heat. LT. Holguin determined the door was locked and ordered FF. Leon to force it, which was quickly accomplished. After the door was forced, the members were met with heavy black smoke and a large volume of fire coming from the apartment into the hallway. LT. Holguin transmitted the 10-75.
FF. Leon controlled the fire apartment door and advised LT. Holguin that while forcing the door he felt it stop abruptly, meaning that someone could be behind it. FF. Leon, without hesitation or regard for his own safety, entered the fire apartment to search for life. He did this without the protection of a charged and operating hoseline and with heavy fire rolling over his head. After entering the fully involved apartment, FF. Leon con-ducted a left-handed search and immediately checked behind the door and found an unconscious male on the floor about three feet in. LT. Holguin immediately radioed Battalion Chief Quinn of the 6th Battalion to inform him of the 10-45. FF. Leon proceeded to drag the victim to the doorway where they were met by FF. Gentile of Engine Co. 5 who was working in Ladder Co. 9 for the tour. The two firefighters removed the victim from the doorway of the fire apartmnent into the public hallway and then passed him off to members of Engine Co. 55. The victim was then removed from the fire build-ing and passed off to EMS for additional medical care.
FF. Leon and FF. Gentile reentered the fire apartment and met up with LT. Holguin to resume their duties as the first due truck inside team. They continued their primary search for additional victims and guided LT. Aviles and the members of Engine Co. 28’s nozzle team to the remaining fire in the apartment. After Engine Co. 28 extinguished the heavy fire, the members of 9 Truck overhauled to check for any fire extension.
For his brave and determined actions that saved a man’s life, FF. Eric Leon of Ladder Co. 9, one half of Bowery U, is being honored tonight.