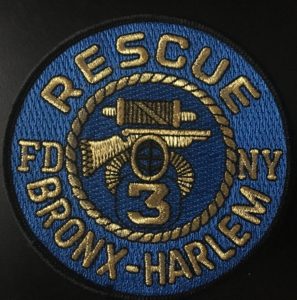 On Sunday, December 17, 2017 at 2317 hours, Rescue Co. 3, under the leadership of LT. Mickey Conboy, was special called for a report of a fire with people trapped at 1236 Simpson Street in the Bronx. The building is a 2-story, 20 x 60 flat roof private dwelling. Rescue Co. 3 arrived at the box before the second due truck, and LT. Conboy heard Ladder Co. 31 transmit a 10-45 over the radio. LT. Conboy observed heavy fire blowing up over the roof of an open 3 x 3 light shaft that was approximately 20 feet back on the exposure 2 side. LT. Conboy and the members of Rescue Co. 3 were ordered by BC Hyland of Battalion 3 to assist with the searches of the building and to check for extension in exposure 4. LT. Conboy had his outside team check for extension while the inside team attempted to enter the fire building through the front door. A large crowd of people at the front door were in the way, so LT. Conboy ordered his inside team to attempt to gain entry to the second floor via a portable ladder to the roof of the front porch. LT. Conboy was able to crawl through the front door while heavy black smoke vented out over his head. At this time Engine Co. 82 was waiting for water in the hoseline so they could begin their attack on the first floor living room and dining room that were fully involved with fire venting out into the hallway.
At this time, LT. Conboy met the can man from Ladder Co. 31 in the hallway at the base of the stairs. He was attempting to keep the fire back to protect LT. Perillo and FF. Niskanen as they were coming down the stairs with an unconscious woman. LT. Conboy asked LT. Perillo if anyone else was searching the second floor, and the answer was no.
The second due truck was not on scene yet so LT. Conboy climbed the staircase to the second floor through extremely high heat. At the top of the stairs, LT. Conboy was forced onto his belly by the heat and he began his search in the front bedroom. Once in the bedroom he found the tools left behind by Ladder Co. 31, and he realized that this was where they interrupted their search to remove the woman.
As LT. Conboy began to search to the right he could see fire blowing into the room and over his head through the window from the open shaft. As he crawled along the wall, LT. Conboy found an unconscious 8-year-old child lying on the floor face up under the window. The curtains and drapes were on fire and falling down on the child. As LT. Conboy picked up the child he saw that the child’s clothes were on fire, and he placed him on a bed away from the window and patted out the flames.
He proceeded to crawl out of the room with the child. Once the child was in the hallway, LT. Conboy passed him off to another firefighter and instructed him to get the child to EMS.
LT. Conboy then made his way back to the bedroom to continue his search where the fire was still blowing into the room from the open shaft. He made a left-handed search and reached the bottom of a bed where he felt a leg between the bed and the wall. LT. Conboy moved the bed and found an unconscious 89-year-old man laying on the floor. The fire was now rolling over his head on the ceiling and extending into the hallway, and a hoseline was not in operation.
LT. Conboy told FF. Browne of Rescue Co. 3 to remove a door and place it over the window in the shaft to slow the fire that was blowing in. LT. Conboy dragged the man out of the room and into the hallway where he handed him off to another firefighter who removed him to EMS outside.
For his determined and undaunted actions that saved the lives of two people, LT. Mickey Conboy is being honored this evening.