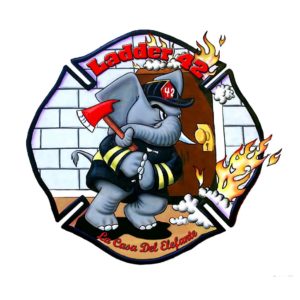 At approximately 1230 hours of February 7th, Ladder 42 was returning to quarters from a previous alarm. While stopped at a red light on the corner of Prospect Ave. and E163rd Street, Firefighter Finnegan noticed smoke pushing from a window on the second floor of 920 Prospect Ave. Firefighter Finnegan notified L42’s Officer, Captain Joseph McConnell. As Captain McConnell was attempting to notify the Bronx dispatcher, the alarm was transmitted over the MDT. Captain McConnell acknowledged the alarm and then transmitted the 10-84 and 10-75 for reported fire on the second floor of the address. The building was a 200×150 class 1 fireproof.Captain McConnell entered the lobby to find frantic residents fleeing the building. Occupants stated the fire was on the second floor and the residents of the fire apartment did not evacuate and furthermore, numerous persons were reported above the fire.

The 14-year old boy and the adult female victim were transported to the hospital with burns and smoke inhalation. Both victims were rescued and alive because of the quick actions of Captain McConnell, Firefighter Heater and each member of L42 that operated and assisted in what was a severe and dangerous fire condition.